Water pollution laws developed in an ad hoc and fragmented manner rather than as part of an overarching, integrated framework. In England, common law developed the concept of riparian rights to attribute responsibilities and rights to those whose land abutted a watercourse, and many of nuisance claims of industrial era concerned water quality.

Water quality and water pollution issues were one of the first areas of EU regulatory activity in relation to the environment with the first EU Drinking Water Directive 75/440/EEC, later folded into the Water Framework Directive 2000/60/EC. EU legislation is still the foundation of UK law today.

The EU Water Framework Directive (WFD) 2000/60/EC is the starting point for water quality regulation and water protection across the EU. It focuses on three broad interconnected objectives:

The EU WFD and its supplementing legislation also set EU-wide rules and procedures to protect water resources and monitor water bodies and require national authorities to:

• register protected areas that require special attention, for instance for drinking water; and
• establish a mechanism to recover costs of water services and ensure efficient use of resources and appropriate payment by polluters.

The EU WFD is supplemented by two “daughter Directives”:

• the EU Environmental Quality Standards (EQS) Directive 2008/105/EC, which sets concentration limits for pesticides, heavy metals and biocides; and
• the EU Groundwater Directive 2006/118/EC, which lays out procedures to assess the chemical status of groundwater, as well as measures to reduce pollutant levels; as well as
• the EU Quality Assurance and Quality Control (QAQC) Directive 2009/90/EC.

The EU WFD and its daughter Directives are mainly transposed under:

The EU Water Framework Directive sits in the centre of the EU’s water protection regime. 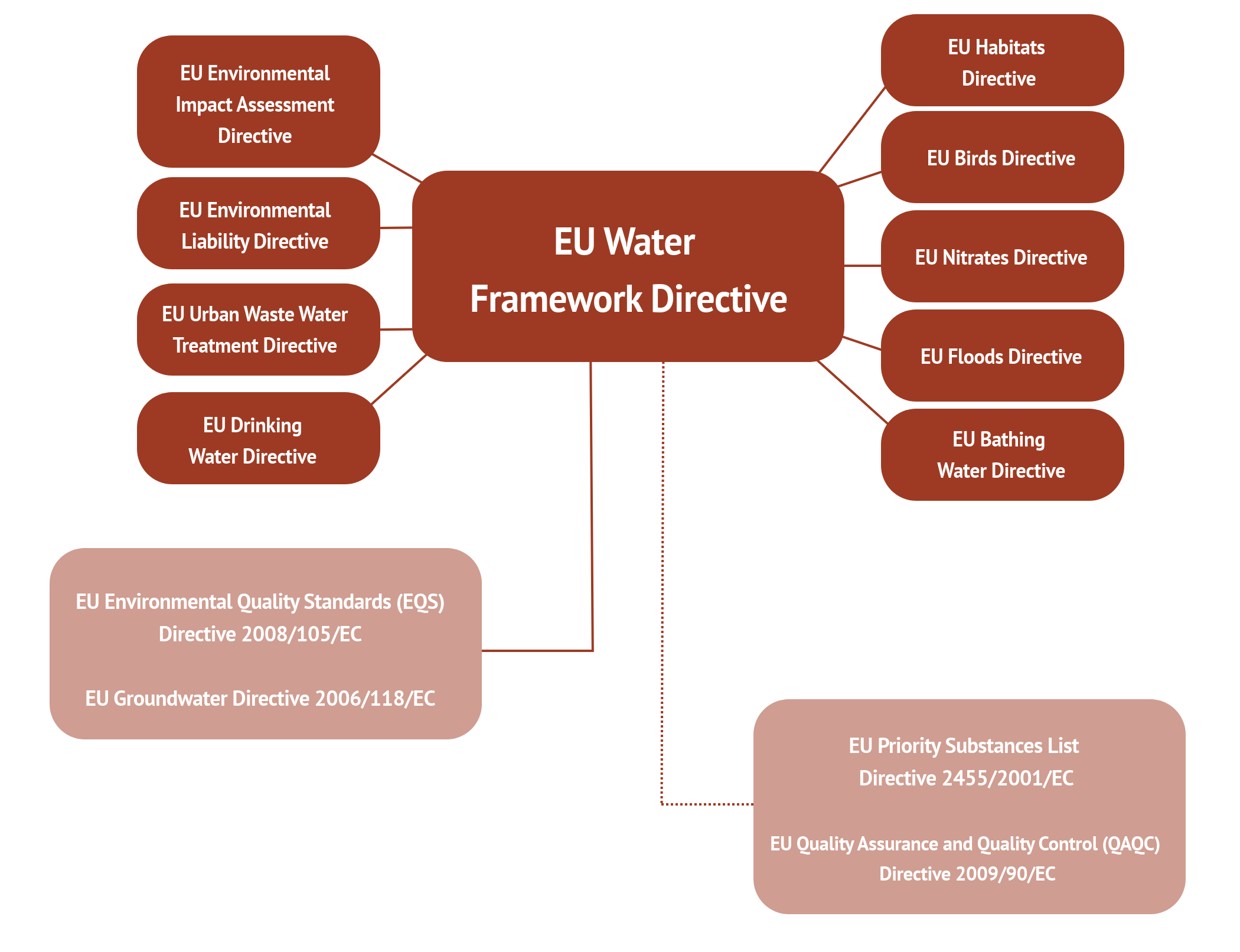 Other Directives and framework legislation supplement and coordinate with the WFD regime (and with each other):

Framework legislation for water regulation in the UK includes:

Water pollution and the impacts of industry on the water environment are covered in the environmental permitting regime in England and Wales and the pollution control regime in Scotland (through specific water environment provisions as detailed below) and Northern Ireland (see SI 2016/1154, the Pollution Prevention and Control Act 1999 and the Industrial regulation guide). Permits are required for water discharge activities and groundwater activities.

In Scotland, water abstraction is regulated by the Water Environment (Controlled Activities) (Scotland) Regulations 2011 (SSI 2011/209) (the ‘CAR’ Regulations) under the Water Environment and Water Services (Scotland) Act 2003. SEPA dispenses the licences. The CAR Regulations provide more widely for the control (through authorisation) of activities that may have an impact on the Scottish water environment, such as abstractions, impoundments, discharges and engineering works in and near freshwater. The Water Resources (Scotland) Act 2013 brings large-scale water abstraction under Ministerial control.

- Defra and the Environment Agency for England, with the EA’s scope extending across the Scottish and Welsh borders in a limited way
- Natural Resources Wales for Wales
- Scottish Environment Protection Agency for Scotland
- DAERANI for Northern Ireland

The EU Floods Directive 2007/60/EC imposes obligations to assess flood risk and map the areas of risk. Flood maps and flood risk assessment are an important consideration in planning, construction and development decisions, and home insurance. The EU Floods Directive also creates the framework for the development of flood risk management plans, intended to work in tandem with the RBMPs. It is implemented in the UK through:

Flood risk permits are delivered through the environmental permitting regime in England and Wales. In Scotland, SEPA regulates flood risk activities under the CAR Regulations. In Northern Ireland, approval from the Department for Infrastructure Rivers is required for planning works which affect watercourses.

The Water Industry Act 1991 requires local authorities to keep themselves informed about the quality and quantity of water supplies provided to premises within their area.

Water services companies must secure a licence for water abstraction (see above). The quality of the public water supply for drinking, washing, cooking, food preparation and production is further controlled under:

There are also provisions for the private water supply sector, under the:

Ofwat for the water industry in England and Wales

The legislation which set out provisions for all urban waste water follows:

Bathing water quality is primarily regulated under the EU Bathing Water Directive 2006/7/EC, implemented in the UK through:

Water companies have to complete and manage water resource management plans as part of river basin management, as well as drought plans to ensure a sustainable public water supply.

Guidance for the preparation of water resource management plans in England and Wales is provided in the water resources planning guideline.

Every year there are about 3,000 pollution incidents involving oil and fuels in England and Wales. The main causes of oil related water pollution are:

• loss from storage facilities;
• spillage during delivery; and
• deliberate disposal of waste oil to drainage systems.

The following legislation requires everybody in custody or control of oil to carry out certain works and take necessary precautions which will prevent the pollution of any controlled waters or the water environment:

The EU Agricultural Nitrates Directive 91/676/EEC mandates the establishment of Nitrate Vulnerable Zones (NVZs) to reduce pollution caused by nitrate (NO3) from agricultural sources leaching into the water environment. It is implemented through:

Environmental liability legislation introduced in the UK to implement the EU Environmental Liability Directive (2004/35/EC) has an important bearing on water protection. The rules are the:

These laws impose duties on operators of economic activities to take immediate steps to prevent damage if there is an imminent threat, and to control damage which is occurring so as to limit its effects. It includes water damage within that scope, defined as ‘any damage that significantly adversely affects the ecological, chemicals and/or quantitative status and/or ecological potential, as defined in [the EU WFD Directive], of the waters concerned’.

An anti-pollution works notice can be served by the regulatory bodies:

Habitats and Birds Directive and conservation

Both the EU Habitats Directive 92/43/EEC and the EU Birds Directive 2009/147/EC cover the marine and water environments in their provisions. Conservation sites with water-related features identified are designated as ‘protected areas’.

In relation to marine areas in particular, the Habitats and Birds Directives are implemented through the Conservation of Offshore Marine Habitats and Species Regulations 2017 (SI 2017/1013)

• the EU Marine Strategy Framework Directive 2008/56/EC, which establishes a framework for protection of the marine environment against damage from human activities, and, much like the EU WFD, required the development of strategies to achieve ‘good environmental status’ by 2020. It is implemented in the UK through the Marine Strategy Regulations 2010 (SI 2010/1627);
• the EU Maritime Spatial Planning 2014/89/EU, to promote the sustainable growth of maritime economies, the sustainable development of marine areas and the sustainable use of marine resources;
• the Marine and Coastal Access Act 2009, providing for the management of the UK marine environment;
• the Marine (Scotland) Act 2010, providing for the management and licensing of activities in Scotland’s marine environment, as well as powers to designate Marine Protected Areas (MPAs).